You might have seen this viral video of a turtle getting a straw pulled out of its nose. Those images caused such outrage that they led to bans on plastic straws.

Or you may have seen the pictures of seabirds lying on the beach, with bottle caps spilling out of their guts or the poor dead whale where 40kg of plastic bags were pulled out of its stomach.

If you have, chances are you feel pretty bad about it.

Those images probably make you think twice about the way you dispose of trash. Hopefully you’re not be the kind of person who would chuck a plastic bottle over the side of your boat or throw a plastic bag full of rubbish into the water.

Because you love the water – that’s why you have a boat, isn’t it? A boat that takes you out into clear, blue seas and wide, open spaces.

A boat that leads you to coral reefs where you can snorkel, dive and explore the wonderful underwater world.

A boat that allows you to share in some of the planet’s most precious places – lakes, rivers and oceans.

The trouble with invisible things

The problem is, humans can be motivated by horrible images like that turtle but we don’t do so well when the problem happens at a different scale.

There’s a lot of research about this. It turns out that people don’t care much about things they can’t see.

So where does that leave us with antifouling – also known as bottom paint?

Bottom paint is toxic, even deadly. But we still slather it all over our hulls in the false belief or hope that it will keep our boats clean and efficient for at least a few months.

What’s the problem with antifouling paint?

Antifouling paint is toxic and poisonous. It’s designed to kill living things; marine life in particular. Which it does, just as surely as plastic in a seabird’s stomach.

This happens in several ways.

So why are we still using antifoul on our hulls?

That’s a good question. There are people all over this earth who spend their whole lives trying to work out why we do the things we do, whether it’s about getting healthy or not driving drunk or cleaning up after a picnic in the park.

It turns out there are a few key answers.

Firstly, we humans need to understand the reasons for changing our behaviour and we have to believe they matter. If you want to know why bottom paint matters, check this post insert link to previously written antifoul post.

We also need to feel that change is possible, that it’s relatively easy to do and that other people around us are doing it too.

Plus, we may need more information and someone to help us make changes.

Which brings us back to the antifoul problem.

Fortunately for all of us, turtles included, there is a solution.

You can say farewell to toxic bottom paint if you use a FAB Dock. Our unique solution keeps your hull clean and dry. There is no need to paint it with toxic antifoul because the water won’t touch it and those nuisance molluscs and algae won’t grow on it.

That means no toxins in the water, no toxins hanging around in the mud or sand below your boat, and no toxins building up in the food chain.

So next time you see another picture of an ocean creature dead from plastics, just remember this: invisible things can kill too.

Don’t be the boat owner who ignores that and trashes the waterways that we all love.

We’d be very happy to show you how FAB Dock keeps the waterways clean.

Electrolytic Corrosion. Or, how come my prop dissolved? 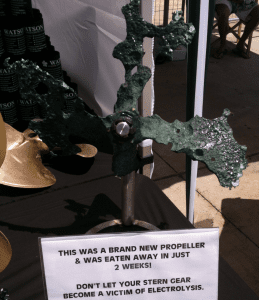 Uh oh. You know you’re in trouble when one (or more…) of these things happens:

If you have an aluminium or steel boat:

If you have a fibreglass boat:

What is doing this to your beloved boat?

This happens when an accidental, or stray, current is present, usually due to faulty wiring or a defect in the metal. These harmful currents may come from on board your boat or from the dock. They are made worse in marinas because other nearby vessels may be generating these currents. The stray current seeks to earth itself and if seawater is present, look out! Seawater acts as an electrolyte, meaning that it is an efficient conductor of electricity. That means stray currents will flow into and through it, causing corrosion in conductive metals. This is particularly noticeable in places where conductive metals are ‘shedding’ current into the sea. Or when your prop dissolves…

Think that can’t happen? To get an idea of how rapid corrosion can be, consider this:

This corrosive process occurs when two different metals touch each other with an electrolyte (such as saltwater) present. Different metals have differing electrical potential and when you put them close to each other, they will generate a very weak, corrosive current.

Prevention: watch out for the neighbours

Imagine two boats floating next to each other in the marina. Both are made of different metals and that means they are generating a weak current between each other. Weak, but strong enough to do damage over time.

Things are worse if these boats are connected to shore power and share a common earth conductor.

And don’t think you’re safe if you own a timber boat. Timber boats have metal fittings, after all.

That means you need to protect your boat.

What’s a poor boat owner to do?

There’s not much you can do about the neighbours but there’s plenty you can do to help your boat stay afloat.

Here are some common solutions that will minimise the risk of corrosion:

Use a FAB Dock and rest easy

Saltwater conducts electricity, so isolating your boat from saltwater will go a long way towards protecting it. This makes FAB Dock an outstanding solution to the problem of electrolytic corrosion because a FAB Dock is designed to stop your boat from sitting in saltwater. Our patented pumping system senses the amount of water around your boat and pumps it out. This will help you keep seawater from conducting corrosive electricity from and to your hull, prop and fittings.

There are other benefits too. Installing a FAB Dock means that not only will you reduce the risk of corrosion but you won’t have to apply antifoul either.

Check out the FAB Dock and find out how you can protect your vessel from corrosive electrical currents. 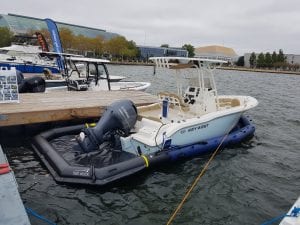 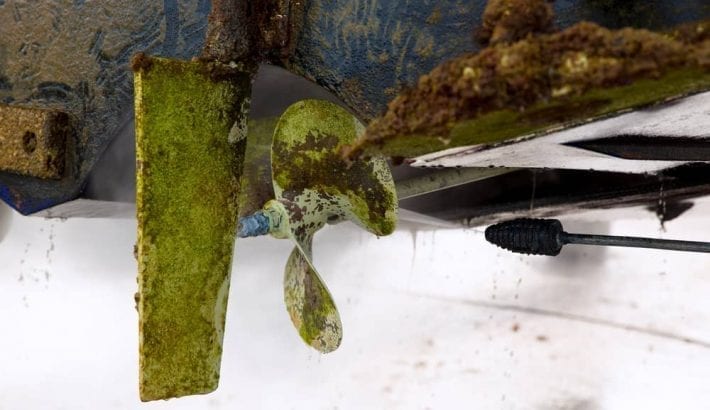 Is Antifoul that bad for the environment?

The scourge of seafarers everywhere, barnacles can seriously affect the performance, resale value and appearance of your marine vessel. Faced with this prospect, boatowners have consistently turned to antifouling solutions as a method for keeping pesky sea growth at bay but this, too, comes with its own host of issues. So is this common coating really that bad and, if so, what are the antifoul alternatives available to those heading out on the high seas?

END_OF_DOCUMENT_TOKEN_TO_BE_REPLACED 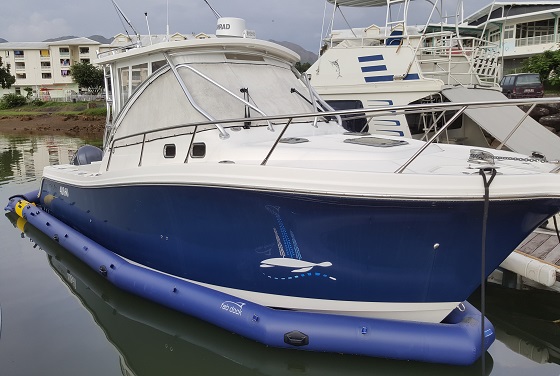 Why dry dock your boat?

Any boat owner who’s experienced the misfortune of scraping pesky barnacles off their hull will attest that storing your vessel in open water is never a good idea. While your watercraft may be designed to handle the worst of the ocean, deterioration and aquatic build-up comes quickly when your vessel doesn’t have a break from the unrelenting saltwater environment.

END_OF_DOCUMENT_TOKEN_TO_BE_REPLACED 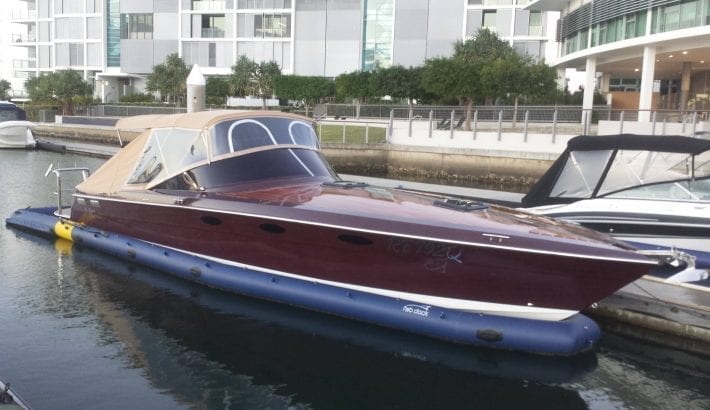 FAB 5 Reasons Your Boat Will Love a FAB Dock

For those immersed in maritime culture, the dilemma of docking your pride and joy will be all too familiar. While some common cumbersome methods demanded repetitive and costly maintenance, an inflatable alternative, FAB Dock, is making waves among seafarers in the know.

END_OF_DOCUMENT_TOKEN_TO_BE_REPLACED 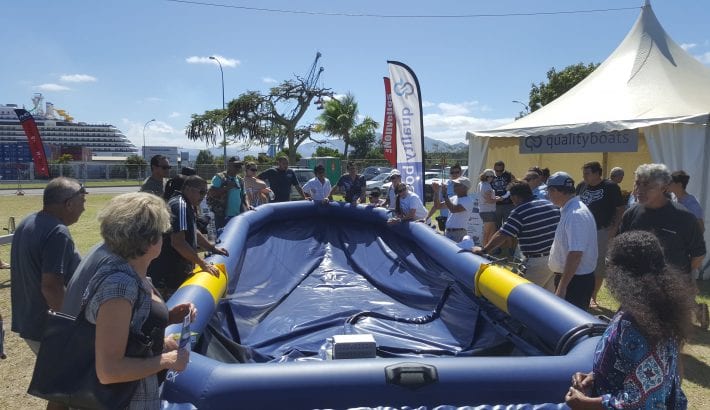 What are the principles of a floating dry dock?

Formerly the domain of much larger vessels, recent advancements in affordability, portability, and ease of use has seen dry docking become the go-to method for keeping your personal marine craft in ship-shape year-round.

END_OF_DOCUMENT_TOKEN_TO_BE_REPLACED

What is the purpose of extended dry-docking for boats?

There’s no denying it. It’s heavenly being out on the water when the skies are clear and there’s a light breeze blowing off the ocean making gentle waves, which are shimmering in the sunlight. Or maybe your idea of heaven is the adrenaline rush of sailing a maxi-yacht through a big swell. Either way, what’s not so blissful is having to worry about damage to your boat due to too much time in the water. When it comes to maintaining your vessel, the benefits of using a boat dry-docking system are many, but you have to make sure you have the right one.

END_OF_DOCUMENT_TOKEN_TO_BE_REPLACED

Electrolytic Corrosion. Or, how come my prop dissolved?