WA filling up with FAB Docks

Boat owners in Western Australia continue to fill up our order books, and prove that the FAB Dock is the most popular dry docking system by far, with another very busy week in this boating mecca. With installations from as far north as Geraldton to the southern area of Mandurah, I won’t even try and list out all the names and boats that are now protected in FAB Docks. And in between all this, we still managed to measure up a whole bunch of new boats that the production team are now flat out building so that we can have them installed in time for Christmas.

The only two things that came off worse than myself after a week of 20 hour days was the kangaroo that decided that at 3am, a billion square kilometres of Western Australian desert wasn’t enough and he wanted to play Frogga with Justin’s brand new Volkswagen Amorak. He wasn’t quick enough and the Germans don’t do a lot of crash testing on large bouncing animals. So there is no saving Skippy and the last I heard, the Amorak wasn’t faring too much better.

I am hoping for a more relaxed and uneventful final trip for the year in a couple of weeks to help Guy install this last batch and join the team and customers for a well earned Christmas drink.

Kanagaroo that hitched a ride back to Perth 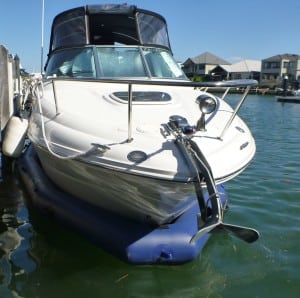 Another Sea Ray in a FAB Dock in WA 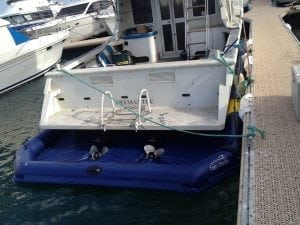